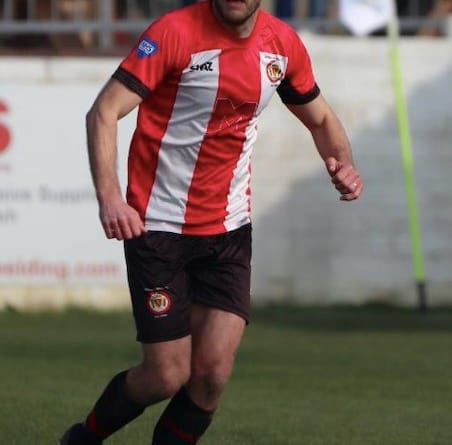 DANNY Lewis admits he is “excited” to be taking over as joint manager of Saltash United with former Plymouth Parkway midfielder Shane Krac.

The appointment of the very popular and hugely respected Lewis, last season’s player-assistant manager, to replace Dane Bunney has gone down very well with supporters.

And he is in the rare position of taking over a club who are doing well, with the Ashes finishing fourth in the Toolstation Western League Premier Division last season.

“I am taking over lads who were able to finish in a particularly strong position last season, and it is just kind of sticking to that, and adding to that a little bit more and just pushing on really,” Lewis told the Cornish Times.

“Every match in that division was a tough one, and it is very much about just trying to learn from our first season back in that league, picking up on some key aspects, and trying to be as consistent as we can. I felt the tougher games for us were against teams at the bottom end of the table, and it is just about making sure standards are right, and we are on it as often as we can be, and if we turn up and play to our potential, then Saltash are more than capable of matching everybody in the league.”

It has been a messy couple weeks at Saltash, with the furore caused by Bunney’s shock departure, but Lewis should certainly prove to be a unifying figure at the club.

“It isn’t how I wanted it to happen, however I did want to get into management, and to get an offer like this wasn’t an offer I could turn away really,” explained Lewis.

Lewis and Krac, who quit for playing for Parkway last season due to injury but then had a very short end-of-season spell at Callington Town, have played together before.

“I first played with Shane for Plymouth Schoolboys, he is a year younger than me so he was under-10s and I was under-11s, and we played together for a year at Parkway,” said Lewis. “Shane is a winner, and as a player I have always wanted to play for people who really show an element of grit and wanting to win, and I have never played against anyone who has shown that as much as Shane.”

“Above that, he has played at a level, and having spoken to him a lot over the years, his understanding of our area, teams in our area, and the tactical aspect of it, are excellent.

“His style will contrast to mine and it is about making sure that our opinions on styles will complement each other, and help and support our team to the maximum.”

Both Lewis and Krac played last season, but Lewis revealed the intention is for Krac to stay on the sidelines for the new campaign.

“Shane is 100% adamant he does not want to play. However, Shane is someone who I am encouraging to keep himself fit as he is still excellent and he was playing for Parkway at times last year in the Southern League,” explained Lewis.

“I envisage him still taking part in training, and he is around if we need him, and to have him available to come on and help us out will be excellent.

“For me personally, I would still like to play, I am still not completely fit after my injury (after fracturing his leg towards the end of the season at Tavistock) and it is just a case of taking it slowly and just ensuring I take part in pre-season training again in a few weeks.

“The injury is easier now, but as you get older the healing process is not as quick. I can walk but I am just not able to run at the minute.”

The fact Lewis will carry on playing is good news for Ashes fans as he enjoyed another excellent season just gone. Lewis and Krac are now looking to add a coach to their backroom staff.

“It is about having a lot of people around you as manager whose skill sets match and can complement, and Shane and I are actively adding a top quality coach who will lead on all of our coaching,” said Lewis. In terms of the squad, he added: “What tempted me to this new position from a team angle is having a quality team here already and they are lads who I have really enjoyed playing with over the years. It is just about keeping everyone together and looking to add a couple just to complement the quality we already have.”

Meanwhile, the Ashes have had to cancel their pre-season Legends friendly against Manchester United Legends scheduled for Saturday, July 2 “due to circumstances beyond their control”.

A club statement said: “We are currently working with the ticket provider to refund the tickets which have been purchased.

“Please bear with us whilst we deal with this, you don’t need to do anything but please be rest assured that we are working through the refunds as quickly as possible. We will provide further details on this in due course. We are really sorry for any disappointment caused, thank you very much for your patience.”

Saltash will be joined in the Western League Premier next season by Falmouth Town, Torpoint Athletic, Barnstaple Town, Welton Rovers and Sherborne Town.

Tavistock and Exmouth have been promoted, Bridport have been relegated, and Brislington have asked to also go down, so second bottom Ashton and Backwell have been given a reprieve.