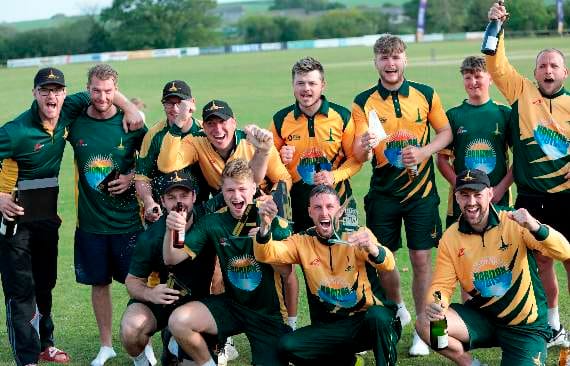 CALLINGTON skipper Joe White described Rob Mutch’s spell as ‘on another level’ as the North Cornwall side won the T20 Kernow Crash for the first time at Grampound Road on Monday afternoon, writes David Sillifant.

The Cobras dominated Penzance from start to finish in a one-sided final that most of the 300-plus crowd would have backed the Penwith club as favourites for.

However Mutch’s remarkable figures of 4-11 in four overs ensured Penzance’s heavyweight batting line-up never got started as they finished on 104-9 off their 20 overs.

Aidan Libby and Kian Burns then added 58 for the first wicket in less than six overs, before Callington eased home with six wickets and 25 balls to spare.

White was quick to heap praise on the South African left-armer.

He said: “Mutchy’s spell was on another level. He was very fired up for it and once he got on a roll he proved impossible to stop. To do what he did set it up for us.”

Once Mutch had finished from the Pavilion End, leg-spinner Harry Sawyers went to work, including taking three wickets in four balls in the 16th over, as he took 4-17 off his four overs.

“I would give him the ball in any situation and I was delighted with how he bowled and to see him take another four.”

The last-wicket pairing of Charlie Goldsworthy and Glyn Furnival took Penzance up to 104-9, leaving White slightly anxious at the turnaround.

He said: “I was pretty frustrated by the last partnership as it got them to one of those in-between scores, which can make life difficult. But the start we then got was exactly what we needed.

“We knew that if we let them get momentum with early wickets then the game would turn in their favour. But the way Aidan and Kian set it up for us made it a fairly comfortable chase.”

Callington are seeking a top- four finish in the ECB Cornwall Premier League, and White is already looking ahead to Saturday’s visit of eight-time champions St Just to Moores Park.

He added: “To win the final is absolutely incredible, and it shows how far we’ve come as a club and a team.

“We came into the game full of confidence after being unbeaten in the T20s so far this season, and two wins in a row in the league, and that momentum helped us get over the line.

“We just need to make sure we keep going as we are and we’re already looking forward to continuing from where we left off today against St Just.”