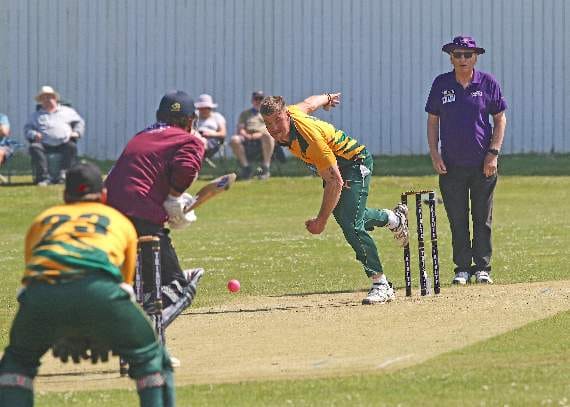 Bond Timber Cornwall Cricket League round-up — Saturday, May 29CALLINGTON made it back-to-back wins in the ECB Cornwall Premier League on Saturday as Rob Mutch’s brutal 49 not out saw them recover to defeat Camborne at Moores Park, writes David Sillifant.

Earlier, Somerset star Lewis Goldsworthy made an outstanding 90 in the visitors’ 183 all out, and once Callington had slipped to 110-7 the writing appeared to be on the wall.

However, Mutch joined skipper Joe White (24no) to thrash five sixes and three fours in a superb display of hitting to earn the sweetest of victories (see page 25).

Elsewhere, Werrington failed to chase down a target for the third week in succession as they lost by 34 runs at Truro needing 155, while champions Penzance eased to a six-wicket victory at Redruth having bowled the hosts out for 86.

The other games saw Wadebridge defend 176 at St Austell, and St Just beat Grampound by six wickets at Cape Road.

In County Division One, Werrington seconds fell to an agonising five-run defeat at home to their Redruth counterparts.

In the chase, Bolland dismissed youngsters Dan Howgill and Toby Ward cheaply. But when Taylor Gerry (44), Ben Jenkin (36no) and Hodgson (14) were in, it looked like a comfortable home win.

But once Gerry and Hodgson went, Werrington collapsed.

Number ten Nick Oldaker made 16, but he was bowled going for a big shot needing six to win, and last man Freddie Ward was bowled soon after by Callum Davis to earn the Reds their first win of the season.

Lanhydrock’s wait for a second win goes on as they were hammered by promotion-chasing Helston.

The Blues racked up an imposing 255-5 off their 50 overs, before Lanhydrock were dismissed for 115 having been 14-5. Ryan Butler made 44 for the Bodmin-based outfit, while Fergus Baker had earlier taken 3-35. In the other games, Hayle won a close contest at Paul by 16 runs, Beacon thrashed an understrength Gorran by ten wickets, which was the same margin of victory for Falmouth over St Austell seconds, and St Erme beat Newquay by 104 runs.

Tintagel were soon in trouble at 20-3 before Pooley (51) and debutant Gyles Reynolds added 62.

Once Pooley departed, bowled by Rebecca Odgers, only Reynolds, who was last man out for 74, made much headway as Nathan Keevil took 4-25.

Elsewhere, there were bad days for Bude and Holsworthy as they were convincingly beaten at home by Roche and Callington seconds respectively.

Bude were all out for just 108, which the visitors passed three down, while half centuries from Liam Hunn (79no) and Peter Tancock (87) helped Callington make 265-3. Matt Shepherd had 3-67.

Twenties from Sam Stacey and Ryan Walter were as good as it got for the hosts, who were bowled out for 108.

Launceston grabbed a much-needed victory at Tideford, chasing down 150 for the loss of five wickets (see page 25), while St Minver’s disappointing start continued as they lost at St Blazey, who earned their first win. Rob Hawken took 4-55 as St Blazey made a decent 217-6, but that proved far too many for the visitors who were all out for 126 in reply. Only Andrew Barrett (38 no) and Steve Hawke (27) passed twenty.

Menheniot-Looe were thrashed by third-placed Wadebridge seconds at Egloshayle Park.

Opener Luke Ripley (47) and Mike Maiden (49) gave the visitors a good start, but once they departed to Charlie Hawken (5-49), the rest of the batting fell away to be all out for 149.

In Division Three, Boconnoc’s home defeat to South Petherwin has opened Callington’s lead at the top to 12 points.

In reply, Toby Morgan and Ben Alford ripped through the top order, before Simon Bishop (21), Dan Jenkin (38) and Richard Stanbury (23) set up an interesting finish.

Andrew Brenton enjoyed a debut to remember for South Petherwin as they surprised Boconnoc at Deer Park.

The all-rounder first took 3-48 from ten overs at the home side could only muster 199-6. Jamie Coates top-scored with 34 while John Niblett and Rob Foot made 32 apiece.

Bude seconds won the local derby at their Launceston counterparts by 52 runs.

Matt Whitefield continued his fine form with 34, but it was left to the lower order of Duncan Malpass (18), Ryan Chalkley (15), last man Chris Carter (15) and 42 wides to get them up to 157 all out. Stand-in skipper Darren Jenkin took 4-40 despite usually being a wicket-keeper.

Launceston’s reply never got going as Wayne Adams (3-38), Andrew De Rosa (3-34) and Mike Taylor (3-20) took three wickets apiece in a disappointing 105 all out. Dan Sloman marked his return to the game with 21.

Elsewhere, Jack Kent (4-37) and David Masters (94no) were the stars of the show as St Neot won by eight wickets at Ladock, while Newquay beat St Austell and Bugle thrashed Roche seconds in the local derby at Trezaise Road.

Petherwon totalled 140-9, but despite a much-improved bowling performance, Duloe passed it in the 32nd over.

Luckett went top of the table as they thrashed Menheniot-Looe seconds by 153 runs at Fourgates.

Openers Martin Budge (46) and Richard Seeley (36) gave the visitors a great start before Adrian Berry smacked 69 in an imposing 231-5. Brian Caddy went for just 24 from eight overs while Chris Crabb took 3-41 off eight.

Lanhydrock lost by a run despite bowling Wadebridge thirds out for 85 at Pencarrow. All four visiting bowlers chipped in before only Jamie Taylor (25) passed twenty.

Grampound have yet to win and proved why as Lawrence Marsh took the incredible figures of 6-11 off eight overs as they were dismissed for just 53.

In Division Five East, Ben Millar made 210 not out for Liskeard at home to Pencarrow, while Aaron Washer scored 110 in Tintagel seconds’ 34-run victory over Werrington fourths. There were big defeats for the second teams of St Neot and Tideford against Foxhole and St Stephen respectively, while Newquay third won at St Minver seconds.

The bottom division saw Gunnislake pull off a one-wicket success at home to leaders Boconnoc seconds in their chase of 137, while Holsworthy were seven-wicket winners at Launceston thirds, who could only make 63. Graham Wild had the excellent figures of 4-11 off his ten overs.

Youngster Zander Zambuni (3-18) took three early wickets for Launceston, but Lyndon Piper (14no) and Will Priest (16no) saw Holsworthy to victory. They are now just six points off the top ahead of the visit of Menheniot-Looe thirds, who conceded to Saltash St Stephens seconds.