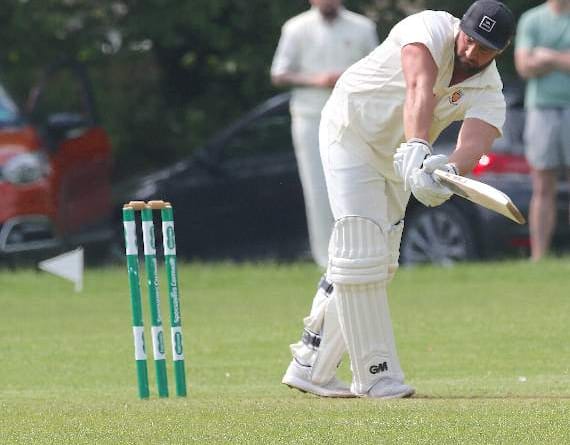 Former Menheniot-Looe and Callington batsman Ben Millar made 210 not out on his league debut for Liskeard. Picture: Glen Rogers

BEN Millar marked his Liskeard debut with a quite magnificent double century as the Lux Park outfit trounced Pencarrow by the huge margin of 154 runs on Saturday, writes Tim Hyslop.

Millar, the Kiwi left hander, carried his bat to remain unbeaten on 210 as Liskeard racked up 331-3 from their 40 overs.

His incredible knock included 17 fours and 18 sixes from just 112 deliveries.

He added 96 for the first wicket with George Hyslop, who made a well-constructed 27 before he holed out to mid-off from the bowling of off-spinner Ollie Sleeman.

It was to be Sleeman’s only success, though, as he was smashed for 104 runs from his 10-over stint.

Matt Wallace came in at number three and scored a useful 16 as he and Millar added a further 57 runs for the second wicket.

Andrew Cobb was lbw first ball but this only brought in another debutant, Chris Calfe, who also carried the attack to the Pencarrow bowlers.

Calfe batted extremely well himself in notching 52 not out from just 50 balls, whilst Millar continued the carnage from the other end.

In reply, Pencarrow never really looked like getting anywhere near the target they required and lost wickets at regular intervals.

Cobb, never one to be outdone, made up for his rare batting failure by taking a five-wicket haul as he dominated proceedings from the St Cleer end.

He ended with 5-26 whilst Wallace completed another fine all-round performance with the two main scalps of Clarke for 58 and, to his delight, Ollie Sleeman, who was expertly taken by Sam Rogers at long-on for 39 as Pencarrow finished on 177, with the final wicket going down in the 40th over.

This win for Liskeard followed their success at Newquay the previous week when Cobb with 95 top-scored against the seasiders.

That day Rogers and James Cobb took three wickets each whilst Wallace bagged a brace on his second Liskeard league debut and there was also a scalp for Tony Walton, who took out Sam Millar with a pearler of a delivery.