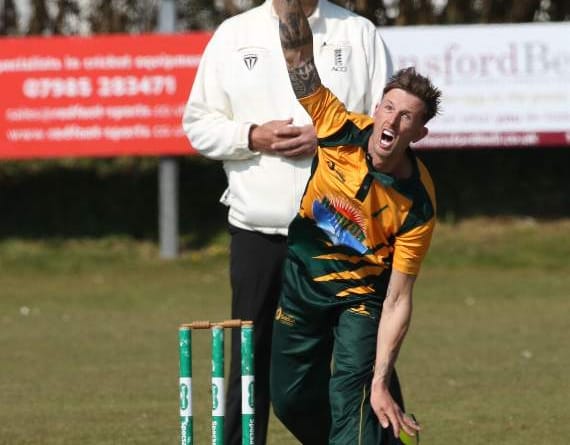 CALLINGTON make the trip to Truro tomorrow looking to consolidate their place in the top three of the ECB Cornwall Premier League.

Cally have won two, lost one and seen one abandoned from their four fixtures so far.

Last Saturday they were rained off at home to St Just with the hosts on 107-5 after 22 overs of a game that had already been reduced to 36 overs per side.

For the fifth league game in succession, skipper Joe White names the same side in a team that has three seamers and three spinners plus a long batting line-up.

Truro are down in seventh, but have a strong side on paper including Cornwall captain Scott Harvey, who will keep wicket and open the batting, Indian Rahul Dalal, hard-hitting all-rounders Rob Harrison and Kyle Van Rooyen and skipper Neil Ivamy, who is widely regarded as one of the best bowlers in the county.

Callington have already been down to Boscawen Park once this season for a double-header in the T20 Kernow Crash – a tournament that they won on Bank Holiday Monday at Grampound Road.

Werrington host champions Penzance looking to pick up their first win of the Premier League campaign.

The four-time winners host Greg Smith’s star-studded side with almost nothing to lose, as they continue to rebuild following the departure of several big names in the spring.

From last weekend’s abandonment at Wadebridge, where the hosts declared on 206-7, but never got to field, skipper Nick Lawson has made just one change as batsman Ben Jenkin comes in for opening bowler Jordan Duke, who drops down to the seconds.

In County Division One, Lanhydrock host Werrington seconds with both sides in need of a victory.

Lanhydrock have won just once – an opening day victory over promotion hopefuls Falmouth — while Werrington are winless in four – although they did pick up nine points against Newquay last weekend. Lanhydrock’s game at Redruth seconds was called off.

Werrington make two changes from the Newquay game as Jordan Duke comes in to bolster the bowling and skipper and wicket-keeper Rob Dymond also returns. They replace Toby Ward who is back to school, and Dan Warring who is away.

Callington were rained off at bottom club St Minver last weekend needing 113 more to win with seven wickets in-hand off 23.3 overs, while Tintagel were 108-1 off just 14 overs chasing 216 at home to St Blazey.

Callington make just one change as 14-year-old bowler Ben Alford replaces Chris Davies, while Tintagel are forced into a couple as Geoff Uglow, Jordan Burnard and Josh Insley are absent, meaning Adrian Pooley comes in for his first game of the season, while middle order men Giles Reynolds and Martin Seldon also return.

Launceston go to third-placed Wadebridge seconds looking to kickstart a season that has been totally ruined by the weather. They have played just three full games from a possible eight, with four of those cancelled.

They make two changes from last weekend’s cancellation against Bude as David Sillifant and Ethan Green return in place of Peter West (away) and Dan Sloman who continues his comeback in the seconds.

Bude host Tideford at Crooklets knowing a win will put them back in the mix at the top end.

Tideford have nine first teamers missing for the long trip to the coast.

Skipper David Lockett brings in Chris, Jake and Ollie Bennett plus veterans Darren Shaw and John Pollard, although that is offset by the absence of Dan Robotham and Mike Burnett who both are unavailable.

Holsworthy give a first team debut to left-arm spinner Graham Wild when they host St Minver at Stanhope Park.

The Trees are back to full strength this week with Sam Stacey, Fraser Priest and Wild coming in for Jerry O’Donughue, Scott Bingham and Nick Ward.

St Minver have been boosted by the signings of former Wadebridge duo Andrew Barrett and Neil Meneer. Although winless, they have been far more competitive in recent weeks. However they know that they can ill-afford to let the 19-point gap to tenth-placed Tideford get much bigger.

Menheniot-Looe are missing skipper Marc Wright for their big game at St Blazey.

In the 12-team division, just three points separate Blazey in ninth and Menheniot in the 11th, so whoever can get the win, will give themselves a nice buffer.

Wright is unable to get to the Philip Varcoe Sports Ground in time, so will play for the seconds at home.

Bar that he is able to name a similar team to last weekend when they had leaders Grampound Road seconds in trouble, although Ben Allsop and Tom Rogers are also out.

Bugle are sitting fourth following promotion, and they entertain a South Petherwin side who have moved up to fifth following back-to-back victories.

Bude seconds have an important game at their Roche counterparts, who are second bottom, while tenth-placed Werrington thirds are able to call upon Cameron Wakefield when St Neot visit Ladycross.

Luckett are 23-points clear of Lanhydrock seconds at the top in Division Four.

Luckett were able to play, and beat Wadebridge thirds on Saturday, while Lanhydrock were rained off at tea against Milton Abbot, having been set 148 to win.

With the Bodmin-based club having a bye, a Luckett win at Milton Abbot could see them over two wins clear in the race for the title.

In Division Five East, which is still yet to fully take shape due to less games being played and the weather causing havoc, only 30 points separate St Stephen at the top and Tideford seconds at the bottom.

Tideford host Foxhole, while St Neot — directly above them — will look to build on last weekend’s victory at Newquay thirds when they host Werrington fourths, who themselves are aiming for back-to-back successes.

Launceston thirds secured a first win of the season on Saturday at previous leaders Boconnoc in Division Six East.

They entertain top-of-the-table Holsworthy seconds who are favourites to go up.