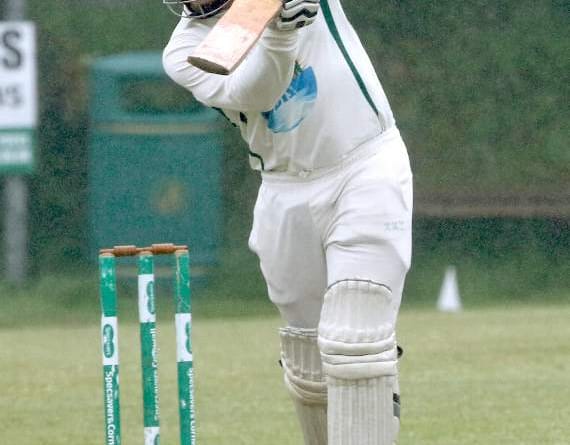 SATURDAY’S Cornwall Cricket League programme was once again heavily affected, with the majority of games abandoned throughout the day.

Fixtures in the mid and west of the county were particularly affected, with the ECB Cornwall Premier League games at Penzance, Camborne and Grampound Road not seeing a ball bowled between them.

The game between Callington and St Just started at 2.15pm and was reduced to 36 overs per side before the game was called off after 22 overs with Callington 107-5.

Aidan Libby made 41 for the hosts.

Wadebridge and Werrington managed to play 42.3 overs at Egloshayle Park, with Wadebridge reaching 206-7 before declaring, thanks to half centuries from Matt Robins (70) and James Turpin (97). Dan Barnard (3-29) and Ben Smeeth (3-42) were in the wickets for the visitors. However, no play was possible after tea.

Newquay won the toss and chose to bat, and got off to a superb start as Joe Crane and South African Grant Stone added 80 before spinner Darren Johns trapped Crane lbw for 38. Stone and Tommy Rodda took the score to 142 before both men fell on the same score.

Rodda was also given out lbw for 33 off Nick Ward, before Stone was caught by Tom Lyle off Mark Taskis for 59.

The rest of the innings was held together by Michael Harding as Werrington’s four off-spinners — Johns, Ward (3-36), Taskis (3-35) and Mark Hodgson (1-36) all bowled tightly as well as taking regular wickets.

Johns (3-43) dismissed Jack Howarth and Dan Ogden in the final over to ensure maximum bowling points.

Werrington’s top three of Dan Howgill, Taylor Gerry and Toby Ward were all under 18, but they got off to a good start. Howgill and Gerry added 41 for the first wicket before Howgill was given out lbw for eight.

Gerry and King’s College student Toby Ward then put on a further 50 before Ward was bowled by spinner Stone for a run-a-ball 28.

From there, Newquay’s spinners tightened their grip as Matt Hartnett soon dismissed Tom Lyle (3) and Hodgson. Seamer Dan Ogden had Gerry caught by Harding for 62, and at 115-5, Werrington needed a superb comeback. Nick Ward and Johns added 16, and Ward and Johns 11, but Hartnett (4-22) and Harding (3-30) soon ran through the lower order to leave them at 145-9.

Dan Warring made a rapid 21 off just 14 balls to secure a fourth batting point, but he was the last man out at 165.

Paul made their way to 78-2 at Helston when play was stopped, while Gorran thrashed their way to 62-2 off 6.5 in the derby at St Austell seconds, when the game was called off. The other three fixtures didn’t start.

In Division Two East, all but Launceston versus Bude started, but there were no winners or losers.

Leaders Grampound Road seconds were in trouble at Menheniot-Looe as Steve Kidd and spinner Hugh Rogers went to work.

They had shared five of the six wickets to fall in Grampound’s 127-6 from 22 overs.

Nearby at Tideford, the hosts had visiting Holsworthy in trouble at 70-6, but both captains agreed to call it off.

Tintagel were in a great position to chase down St Blazey’s 215-8 at Butts Field, with Geoff Uglow unbeaten on 67 after just 14 overs. They were already on 108-1.

Bottom side St Minver put in an impressive performance against promotion-chasing Callington seconds.

Half centuries from Ben Hawken, Andrew Barrett and Neil Meneer helped them recover from 72-5 to post 239-8 off their 45 overs.

Opener Hawken made 52, but when he was out at 143, Callington would have fancied their chances. However former Wadebridge men Barrett and Meneer added 95, with Barrett striking 81 off 85 balls, while the belligerent Meneer needed just 41 balls to make 54. Jim Shorten had the tidy figures of 2-43 off 12 overs, while Chris Simpson had 3-33 off seven.

Toby May (4) and Nick Parker (11) went to opening bowlers Dennis Brown and Mark Turner to leave the hosts as favourites at 29-2.

The in-form Liam Hunn and Peter Tancock then added 41, before Tancock went for 12 off 25 balls, caught by Meneer off Ben Lamb. Lamb’s two overs cost 35 as Hunn (57no off 62) and Simpson (25no off 17) took him to the cleaners. But with the weather closing in, and the game in the balance, it was decided it was too wet to continue.

Wadebridge seconds had Roche in trouble at 23-3, but no play was possible after nine overs.

The top of the table clash between Callington thirds and Boconnoc in Division Three East was abandoned at tea at Landulph.

Blaze Eigenmann and Ross Braund bowled their ten-over allocations, and went for just 59 between them, while their were three run-outs.

South Petherwin and Launceston seconds agreed to play in tough conditions, although the hosts fared much the better as Cornwall Over 50s skipper Paul Clements ran through the visitors.

He took 5-26 off his 12 overs as Launceston were rolled over for just 91. Only Glenn Coles (22) and Tristan Rees (11) reached double figures. Left-arm spinner Adrian Clements chipped in with 4-17.

Darren Jenkin dismissed Adam Warne for nought, but former Luckett players Andrew Brenton (62no) and Adrian Warne (24no) saw the job through in just 13 overs.

Bude fell to a 180-run defeat by Bugle at Crooklets.

Bude made just 65 in reply as swing bowler Martin Hutchings had the remarkable figures of 8-22 off ten overs.

The games between Newquay seconds and Werrington thirds and St Neot and St Austell thirds were both postponed.

Adrian Berry kept up his superb form as Luckett beat Wadebridge thirds by five wickets in the drizzle at Chapel Field.

Luckett chased the score in just 24.2 overs as Berry struck 12 boundaries and a six in a superb display of hitting.

Petherwin reached 146-6 off their 40 overs with veterans Ian Clements (52) and Roger Gerry in the runs.

However ’the Road’ were led home by Martin Roberts’ unbeaten 84 despite Ollie Peterson’s 2-42.

Duloe made 126 all out in the derby at home to Menheniot-Looe seconds before rain curtailed proceedings. Giles Francis took 4-35 with Martin Jordan’s 27 the best for the hosts.

St Blazey seconds and Saltash St Stephens was well poised when rain ruined the game, with St Blazey 125-3 after 31 of their 40 overs.

Richard Woodman top-scored with 46 while Daley McErlain was unbeaten on 33 off just 21 balls. Jamie Hine had 2-36 against his former club.

Pencarrow beat Tintagel seconds in the local derby at the PCG with skipper Ollie Sleeman making 143 not out.

Pencarrow were in trouble at 73-5 thanks to wickets for Frank Page (2-28), James Ellis (2-32) and Keith Lawrence (1-19), but Sleeman, who carried his bat, found a perfect foil in Phil Williams who made 33 before he was out in the last over.

Five of the visitors top six passed 20, the highest being 33s from Dave Watts and Mark Bunt as they finished on 191-6.

Newquay got off to a decent start themselves, but Watts completed a superb game with 5-37, while Mark Budge took three stumpings.

Nigel Dennis showed his class as Werrington fourths won for the first time this season with an eight-wicket victory at home to Tideford seconds.

The visitors posted a competitive 186-5 after winning the toss with Dave Holland (56no) and Duncan Nobes (57) both passing fifty. Nigel Cowling took 2-31.

Dennis then carried his bat for an unbeaten 95 as they got home with three balls to spare. Thirteen-year-old Marley May struck 54 batting at three.

Liskeard versus St Minver seconds was abandoned after three overs with the visitors on 10-0.

Although opener John Sleep (31) and Ryan Greenslade (16) got the Lostwithiel-based club off to a decent start, change bowlers Emma Barnes (5-20) and James Law (4-19) shared nine wickets as Boconnoc were shot out for 89.

In response, Andrew Baker (44no) and Simon Wilton (22no) did the business inside 22.2 overs to earn them a first win of the season.

Lawrence Marsh struck 78, but it was Gunnislake who were left the more frustrated by their abandonment at Saltash St Stephens.

Menheniot-Looe thirds conceded their game at Holsworthy seconds, who are now of the pile.