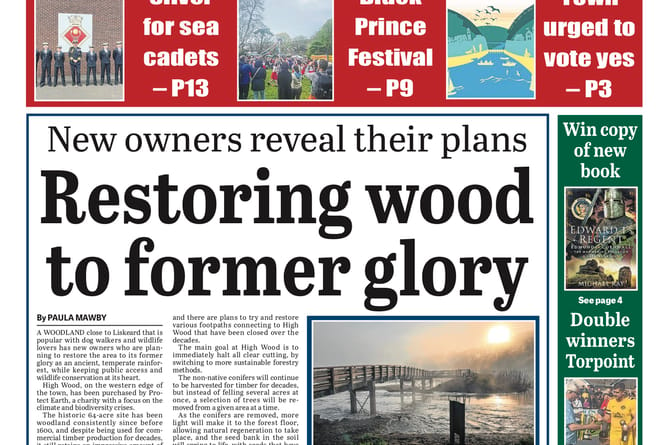 The front page of this week’s edition of the Cornish Times, dated Wednesday, May 11, 2022. (Picture: Cornish Times )

THIS week’s Cornish Times is on sale now and inside you will find news and features including:

-        We lead on the fact that the new owners of a woodland close to Liskeard that is popular with dog walkers and wildlife watchers say they are planning to restore the area to its former glory while maintaining public access and keeping wildlife conservation at its heart.

-        Looe residents are being urged to vote ‘yes’ to the town’s Neighbourhood Plan as it goes to a referendum today (Thursday). The outlawing of using new-build properties as second homes or holiday lets is a headline policy in the plan, as are policies aimed at addressing climate change and ensuring developers take action to prevent landslides.

-        This week’s Cornish Times carries a competition in which two lucky readers can each win a copy of a new biography of Edmund, 2nd Earl of Cornwall, who as well as owning all of East Cornwall’s castles was one of the richest men in 13th century Europe and a key figure during the reign of the conqueror of Wales and nemesis of Scotland’s ‘Braveheart’ rebel leader William Wallace, King Edward I.

-        In her latest Westminster column, South East Cornwall MP Sheryll Murray admits that her Conservative Party lost more seats in the local elections held in various parts of the country than she would have liked but she believes that the current cost of living crisis may be the main cause.

-        Meanwhile, in this week’s Liberal-Democrat In My View column, Cllr Colin Martin, a spokesman for the Climate Emergency, writes about the lack of progress achieved on some of Cornwall Council’s stated green policies.

-        Local people are being urged to have their say on a major new planning application for a farm near St Cleer which will include 70 new houses, a 50-bed extra care facility and a commercial hub which the parish council says will have big implications for the village.

-        We have details of the new footbridge at Calstock which seems sure to become a popular attraction for walkers in the Tamar Valley.

-        This week’s Cornish Times has a feature and pictures by Carly-Ann Rose about the Rame Peninsula’s Black Prince Flower Boat Festival. It contains many fascinating insights into how the custom developed.

-        Our Events page this week highlights a number of happenings in Saltash, including a report on last weekend’s two-day May Fair plus special upcoming events in the town including a Cornwall Comedian of the Year contest featuring a series of comedy nights and with the winner receiving a cup named after the late Cornish legend Jethro (aka Geoff Rowe), and the Elvis Presley Fan Club of Great Britain Cornwall and Devon branch hosting one of the UK’s top tribute acts at Saltash Social Club. The page also features our regular What’s On listings and a news item on calls for nominations for Liskeard’s Community Champion Awards.

-        Our Community page features lots of village and club reports as well as pictures of Liskeard Royal British Legion’s VE Day commemorations, plus a sad farewell to Coad’s Green Community Lunch Club, which has raised thousands of pounds for good causes over the years.

-        We also report on Torpoint Sea Cadets winning silver at the National Drill Competition held at HMS Raleigh, Lostwithiel’s Castle Brewery winning a gold award at the SIBA South West Independent Beer Awards, and an ancient black walnut tree on the Antony Estate near Torpoint being dedicated to Her Majesty the Queen in her Platinum Jubilee year. We also have pictures from Looe Community Players’ play reading evening and of a St Martin’s Primary School, Liskeard, pupil receiving a special commendation for reading 2 million words – one of a number of students receiving this accolade at the school.

-        This week’s paper has a three-page Farming section, including reports on moves by MPs and the Government to support farmers, a Penbode Vets’ column on managing yield at grass, and the regular Truro Livestock Market Report.

-        There are six pages of Sport in this week’s Cornish Times and we lead with Torpoint Athletic captain and two-goal hero John Heveran expressing his delight for his team-mates after the Tamarsiders secured a League and Cup double and lifted the Walter C Parson Cup for the first time since the formation of the Peninsula League in 2007. Other football coverage includes South West Peninsula League, St Piran League, East Cornwall Premier League and Women’s. Other sports featuring this week include Bond Timber Cornwall Cricket League, Badminton, Athletics, Sailing, Golf and Bowls.

-        This week’s Cornish Times also includes Ray Roberts’ latest Nature Watch feature and pictures, which is now being carried fortnightly. This time you can learn about how clever oil beetle larvae take a flight on the backs of bees so they can feed on the contents of their unwitting hosts’ nest. Other favourite features to be found inside this week’s edition include Family Announcements, Court reports, Wordsearch, Puzzles Page, Motoring, Homes and Gardens, Recruitment, Property, Planning and Public Notices.

There is all of this and more in this week’s Cornish Times, on sale now.