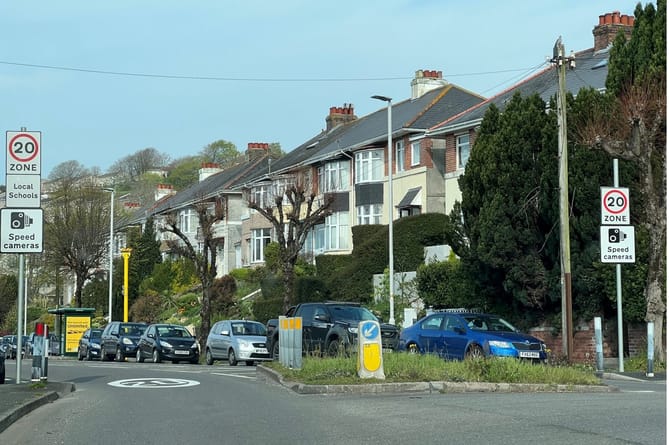 Signs in Old Laira Road, Plymouth, warning of the 20mph and the speed camera due to be switched on on Monday. (Picture: Vision Zero )

THE Vision Zero campaign formed by Devon and Cornwall Police, the Police and Crime Commissioner and other organisations and agencies to tackle the problem of speeding has announced that the first 20mph speed camera in Devon and Cornwall has already detected more than 23,500 speeding motorists – before even being switched on.

The startling figure has prompted a warning from both the police and council ahead of the camera in Old Laira Road becoming fully operational on Monday (May 9).

During a test period prior to activation, the cameras detected more than 1,100 speeding drivers in the first 24 hours alone, with the total number detected during the test period now standing at over 23,500.

The bi-directional speed camera system has been installed by Plymouth City Council following a consultation carried out last year. Local residents told the council they would rather see an average speed system in place than traffic calming measures.

Supt Adrian Leisk, strategic roads policing lead for Devon and Cornwall Police and chair of the Vision Zero enforcement activity group, said: “The results from the cameras’ test period are really troubling and drivers are obviously ignoring the clear 20mph signs in that area.

“Speed is a big contributory factor in serious collisions. Travelling too fast both reduces the time in which a driver can react and increases the risk of serious or fatal injuries in the event of a collision.

“The cameras on Old Laira Road will go live on Monday, May 9 so please take this as advanced warning.”

Those caught travelling just over the stated speed limit will be offered an educational course, provided they have not completed one in the last three years. However, offences above this threshold will face a £100 fine and three points or sent directly to court for higher speed offences.

The camera system on Old Laira Road is part of a new scheme in the area which also includes a new zebra crossing. It was created in response to community concerns over speeding through the area and a history of collisions resulting in injuries to vulnerable road users. There are also local shops, a nursery and primary school located close to or on this busy route.

A spokesperson for Plymouth City Council added: "We consulted with residents at the end of last year about extending the existing 20mph speed limit.

“They told us they did not want the traffic calming measures we had put forward, but instead wanted average speed cameras. We listened, redesigned the scheme and secured the extra funding needed.

“This scheme is about keeping people safe on a very busy narrow road. Keep your speed down and you won’t get fined.”