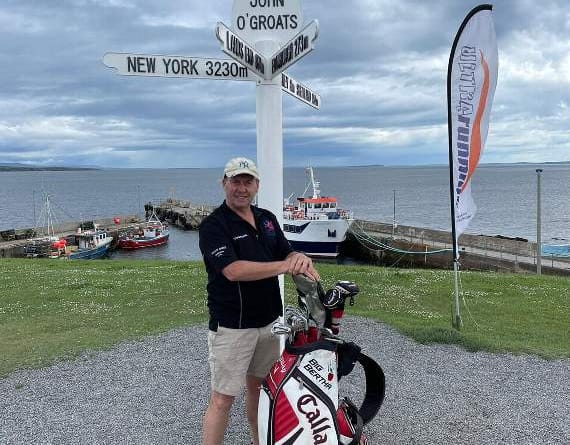 David at his starting point John O'Groats. Look out for him in Looe this week

A MAN is undertaking a mammoth ten-week charity challenge and will, between Wednesday August 18, and Sunday, August 22, be travelling through different towns in Cornwall, including Looe.

Former armed forces skiing and mountain craft trainer, David Sullivan, 58, from Surrey, began ‘The World’s Longest Golf Hole’ challenge on June 11. Starting at John O’Groats, he will be walking over 1,000 miles and making an estimated quarter of a million golf shots, before he reaches his final destination, Land’s End.

David set himself this extraordinary task, which involves walking between 14 and 30 miles every day and camping overnight, to raise awareness of the importance of knowing CPR, and to raise funds that would enable more towns and villages across the country to install life-saving defibrillators.

At every one of David’s stops on his mammoth journey, he’s training people how to perform CPR. David’s passion for teaching CPR came about in 2016 when, while playing golf, he was faced with a life-or-death situation. When a young man experienced a cardiac arrest in front of him, David luckily knew what to do. He gave CPR for 17 minutes until the man could be treated with a defibrillator.

“It was thanks to my training, and a defibrillator being nearby, that I was able to help save the man, who luckily made a full recovery,” says David.

“When something like that happens right in front of you, it makes you realise how precious life is and how important it is to know what to do in that kind of emergency. It was an experience which profoundly affected me, and now it’s my mission to create an army of life savers all over the country.”

His estimated time of arrival each day is 3pm. Donations can be made by visiting www.justgiving.com/crowdfunding/david-sullivan-77