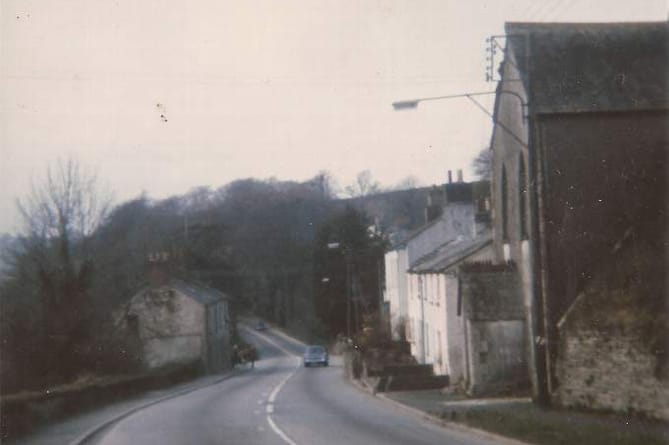 The chapel and houses at Moorswater, pictured here in 1972, before the bypass was built

LONGSTANDING reader of the Cornish Times Grace Northcott, of Liskeard, recently brought into our Webb’s House office this 1972 photograph of Moorswater (pictured top right), with a now vanished chapel and other buildings showing on the right of the road then leading towards Dobwalls.

Grace remembers that at the time the picture was taken her family was living in Pelynt but her father used to go into Liskeard every week on market days.

As the modern comparison view (below right) shows, the same location is virtually unrecognisable today as the buildings in Grace’s photo have now gone and the roadway now forms part of the sliproad up to Liskeard from the Plymouth-bound carriageway of the Liskeard bypass part of the A38 dual carriageway. The A38 now almost fills the valley that forms the background to Grace’s photo.

Moorswater village was formed in the 19th century at the junction of the Liskeard & Caradon Railway and the Liskeard & Looe Canal. The flat valley floor was ideal for a goods yard and the reliable water supply helped other industries develop including a concrete works and wool factory. As freight increased, the canal was replaced with a railway, which had its own Liskeard station at Moorswater – and passengers wanting to transfer to the Great Western Railway mainline station (today’s Liskeard railway station) had to toil up the steep hill into the town on foot or in horse drawn vehicles.

At its height, Moorswater village was well populated and had the Methodist Chapel which appears in Grace’s picture.

Copper ore brought down from mines on Caradon Hill was taken by the canal and later railway to Looe for shipment to Barry in South Wales, with the barges and railway wagons returning with coal to heat buildings, power steam engines and make town gas. Horse-drawn wagons carried coal and passengers up the New Road to Liskeard.

An old kiln beside the level crossing is a reminder that lime was an essential import both for the building industry and agriculture. Roasted lime was spread on fields to reduce soil acidity and toxin levels in crops.

Behind the photographers in both views but still dominating Moorswater is the GWR mainline railway viaduct. In 1881 Brunel’s weaker original wooden trestle-topped structure was replaced with the stronger stone arched viaduct still in use today. The original Brunel piers can be seen next to the viaduct, however.

By 1910 mine traffic had fallen off and the new curving spur railway line had been built in 1901 to link the Looe Valley railway line at Coombe Junction to Liskeard GWR station up on the hill above. Moorswater therefore lost its function as the transfer point for passengers and freight. The declining village gave way to the

A38 road widening in the 1960s, and the scene around Moorswater changed even more when A38 was later upgraded with the Liskeard bypass in the mid-1970s and with the Dobwalls bypass which opened in 2008.