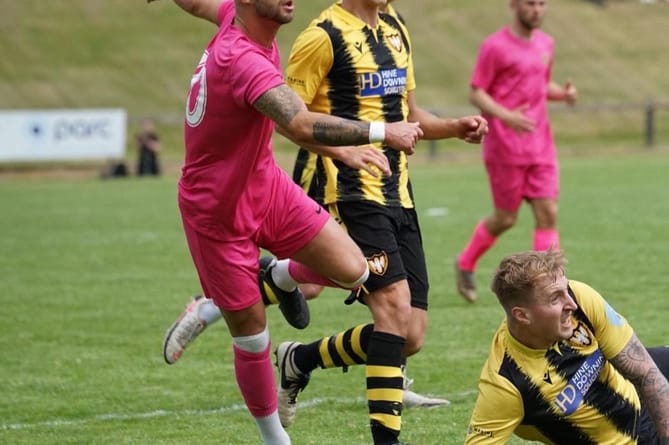 The news that all Torpoint Athletic fans have been wanting to hear – ‘I’m going nowhere!’

The ace marksman took his tally for the season in all competitions to an incredible 50 goals after scoring twice in Point’s 4-2 Champions Charity Bowl defeat to Falmouth Town at Bodmin’s Priory Park on Saturday.

He joined Torpoint after leaving higher league sides Saltash United and Plymouth Parkway as family commitments meant he was unwilling to do all the travelling involved, and there were fears that Point’s promotion to the Western League Premier Division might see him make a similar decision this time.

But speaking to the Cornish Times after the game, Richards said: “I’m not going anywhere.

Danny ‘excited’ by his new role

“I’m at home here at Torpoint, my friends are here, the ground is just around the corner from my house, so half the games are literally on my doorstep.

“The travelling in the Western League has gone a bit more local now with the likes of Falmouth, Mousehole, Helston, Millbrook and Saltash in the league, and they are all within an hour or an hour and a half, so it is not too far.

“Games with the likes of Millbrook and Saltash are going to be brilliant. I was a bit gutted this past season because we didn’t have any of those local derbies in the league, other than Elburton Villa, but it is always nice playing the Cornish clubs, not only because you have got friends that play for them, but the grounds are much better as well, so I am looking forward to it.”

Richards revealed that he has been struggling with a groin injury since a game against Dobwalls in September, and in the past two weeks he has almost been playing on one leg against Falmouth and the League Cup final against St Blazey, but he still managed to score three goals across the two games.

“I arrived at 11am today and had a little run, knowing full well in my head I am not 100% fit, and to be honest I’m probably not 75% fit, but a couple of tablets luckily sorted it out.”

Told he now had 50 goals for the season, he added: “I am absolutely over the moon with that, because the team aim was to win the league but my personal aim was to score 50 goals overall.

“It has been a very successful season, not just for me but for the club and Curtis Damerell, and between us we have got over 100 goals.”

“We are a little bit gutted not to win the treble, we will take it on the chin, you can’t win them all, but over the 90 minutes I think we were the better team, we had the better chances, and on other day we win that game five or six, but it was not to be.

“Callum (Thompson) hit the bar and then they went straight up the other end and got a penalty and made it 3-2. It is hard to take because on the day we were the better team.”