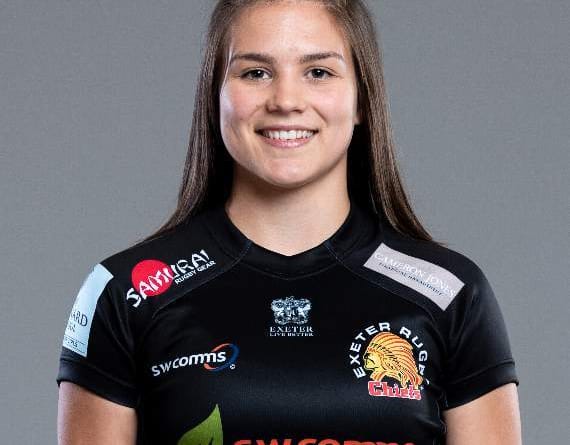 Doidge, who began playing rugby with the Liskeard-Looe mini section, joined the squad on Monday ahead of their opening Pool A game against Scotland at Doncaster’s Castle Park on Saturday.

The game kicks off at 3pm, and will be shown live on the BBC iPlayer.

Full-back Doidge is one of two Exeter Chiefs players named in the squad, along with fellow back Flo Robinson. Former Liskeard School and Community College student Doidge has been part of Red Roses training squads since the new year and has impressed in the 2020/21 Allianz Premier 15s season.

All 38 players are part of the Six Nations tournament testing protocols which means they can train with the group and are eligible to feature in matchday squads if selected.

England have carried out individual risk assessments with players to allow them to work or play for their clubs outside of England camps, with further measures put in place to protect the training bubble.

Following the match in Yorkshire, England take on Italy at Stadio Plebiscito, Padova (Saturday, April 10, kick-off 2pm BST and live on BBC iPlayer) before hosting the final play-off match, the first Women’s Six Nations fixture to be broadcast on the main BBC network (on Saturday, April 24, 2pm, BBC Two) with the venue to be confirmed.

The Friday after the tournament concludes, Middleton’s side will travel to Lille to take on France in a Women’s Six Nations exhibition game in their maiden visit to Villeneuve d’Ascq (Friday, April 30, 8pm BST, BBC iPlayer). Middleton said: “From a performance point of view we’ve been training really hard for a few months now. We have a lot of evidence from training to say we’ve raised our intensity and physicality whilst at the same time developing our ability to execute accurately and make good decisions under the pressure that comes with that type of intensive pressure training, that’s what we want to see when we go into the Scotland game.

“We want a high tempo, high energy game with quality play off the back of it.

“We have named a wider squad than usual and are able to bring in a number of development players from the pathway. With the pathway being impacted by the pandemic, we saw an opportunity to help support the development of young players, bringing them into senior camps which was a win-win all round and there’s every chance we could see those players feature over the course of the games.”