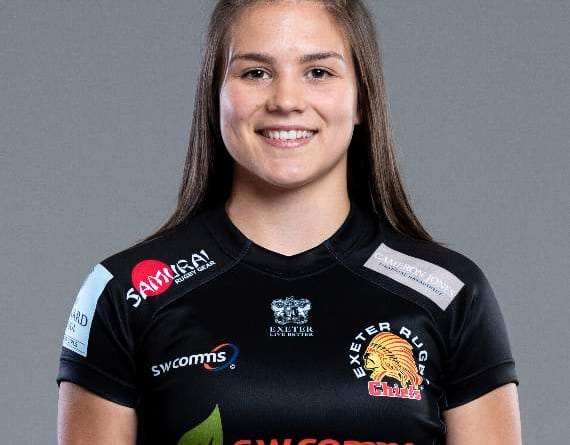 MERRYN Doidge from Liskeard won the Player of the Match award as Exeter Chiefs Women pulled off a superb 7-6 victory over unbeaten Allianz Premier 15s leaders Harlequins at Sandy Park.

The 20-year-old former Liskeard School and Community College student and ex-Liskeard-Looe player was one of the stars of the show, at full-back, as the Chiefs backed up the previous weekend’s victory over Saracens with what head coach Susie Appleby described as a “scrappy” success.

An early try for McKinley Hunt, converted by Gabby Cantorna, proved to be Exeter’s only score of the afternoon in a fiercely contested encounter which saw the visitors counter with two penalties from Ellie Green.

The win – Exeter’s sixth in 11 games – ensured the Chiefs remained fifth in this their first-ever season in the women’s top-flight.

Appleby said: “I think Merryn at the back had a good game. The effort that has gone into that performance is massive.”

Doidge has played for England U18s and U20s, and she will be hoping to be named in the Red Roses squad for the re-arranged Women’s Six Nations Championship in April.

Talking about the victory, Appleby said: “To say the game was scrappy is an understatement.

“It was ugly, yes, but a win and we’ll take it. It was a really physical encounter out there, but I thought our defence won the day.”

Victory over Harlequins was Exeter’s fourth on the trot, and they backed that up yesterday (Saturday) with a 17-10 win at Worcester.