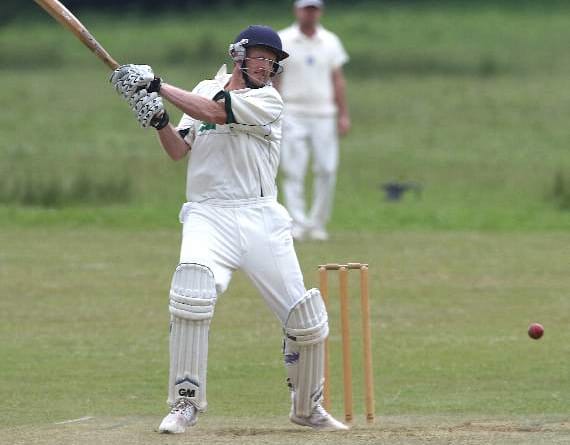 Steve Marchant on his way to 65 against Ladock on Saturday. Pictures: Glen Rogers

FOR the second week in succession there was a full programme played across the county with several close finishes.

Elsewhere in that division, Greg Smith walloped 189 as Penzance thrashed Grampound Road by 217 runs, St Austell continue to impress as they beat St Just by 52 runs, and Truro proved too strong for visiting Wadebridge at Boscawen Park, winning by six wickets.

Werrington seconds continue to impress in County One as they pushed promotion-chasing Falmouth all the way on the Cornish coast.

After openers Dan Howgill and Taylor Gerry went cheaply, half centuries from Ian Searle (53) and Tom Lyle (77) plus a late 22 from Simon Bishop set the hosts 204 to win.

Scott Kellow, who had earlier taken 3-29, and Adrian Noott added 77 for the opening wicket before Jordan Duke dismissed Noott LBW for 19.

Duke (3-37) quickly removed Harry Roberts and Stefan Churcher to get Werrington back in the game.

Kellow and Charlie Campbell then added 63, and although Campbell went to Darren Johns (2-34) with the score at 153, it appeared the home side would ease to the finishing line.

But while Cornwall all-rounder Kellow continued to bat on a different level to anyone else, wickets continued to fall.

Paul Goodwin became the eighth wicket to fall, but Duncan Ayres (2no) and James Hodges (2no) kept their heads to get Fal over the line and move them up to second, 12 points adrift of leaders Hayle, which they got thanks to Scott Kellow’s 119, although with ten required and two wickets left, the game was in the balance.

Lanhydrock continue to struggle this time losing by 157 runs at Paul.

But skipper Keiran Bowden played a superb captain’s innings in making 87, while others chipped in as they were eventually dismissed for 214.

Opening bowlers Damon Nicholls (2-21) and Ben Brooks (4-23) then destroyed the Lanhydrock top order before Matt Lawrence (2-8) and Bowden (2-3) cleaned up the tail.

Only Jake Carter (10) and Will Wagstaffe (10no) reached double figures.

Elsewhere, there was a huge shock as Castle Field as St Erme beat second-placed Helston by 35 runs.

The hosts were dismissed for just 124, but Spencer Wilcock’s five wickets saw the Blues bowled out for just 89.

The other game saw Gorran bowled out for just 91 at home to Redruth seconds before the visitors knocked it off two down. Luke Johnson took seven for 20 before making an unbeaten 48.

Alex Mortimore (2-21) continued his fine form as he dismissed both openers cheaply, but Roche battled back to make 190 all out, Harry Gregory top-scoring with 43.

Although Brown and Chris Simpson (10) went, Tancock was joined by skipper Toby May (31no), to get over the line with more than three overs to spare.

Hockin (58) — batting at number eight – combined with wicketkeeper Matt Mansbridge (66) to add 140 for the seventh wicket to take the score to 188 before eventually finishing on a par 205-8.

Hockin then ripped through the hosts top order, but Matt Taylor’s sublime 100 coupled with bits and pieces from Harry Tinker (22) and Stuart Parkyn (19no) preserved Wadebridge’s unbeaten home record.

St Minver are now just 16 points from getting out of trouble, and five adrift of second bottom Tideford after securing a 27-run victory over visiting Menheniot-Looe.

St Minver posted an impressive 246-9 after winning the toss, in no small part to a fourth-wicket partnership of 116 between Antony Ash (87) and Rob Hawken (60). Tom Preston-Evans had earlier made 21, while Andrew Barrett’s quickfire 17 got them up to a decent score. Menheniot’s reply got off to a rapid start as openers Luke Ripley (55) and Hugh Rogers (38) added 84 before Rogers was caught off Dennis Brown in the 12th over.

Ben Hawken dismissed the hard-hitting Ripley (55) and Matt James (4) in quick succession and from there Menheniot found themselves under the cosh at 144-5.

Steve Kidd and skipper Marc Wright added 50, but both men went with the score on 194, Kidd lbw to Neil Meneer and Wright bowled by the returning Brown (2-62).

The North Cornwall side, who had yet to win, managed to keep their cool as Menheniot were dismissed for 219 with 34 balls unused.