See what’s inside the latest issue of the Cornish Times, on sale now 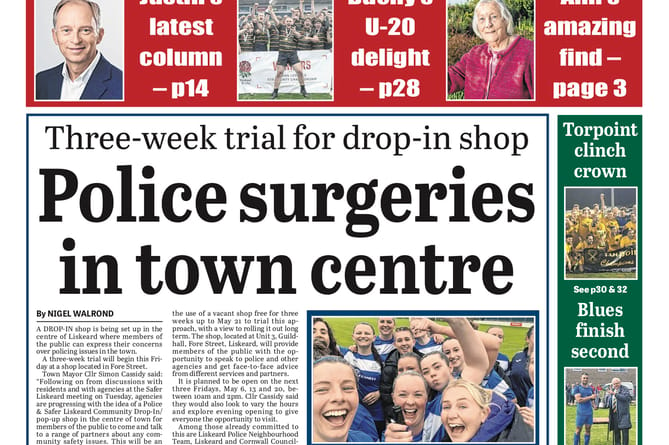 The front page of the latest edition of the Cornish Times dated Wedensday, May 4, 2022. (Picture: Tindle Newspapers )

This week’s Cornish Times is on sale now and some of what you will find inside includes:

- We lead with the fact that a police drop-in shop is being set up in the centre of Liskeard where members of the public can express their concerns over policing issues in the town to officers.

- We tell the incredible story of hw a 90-year-old Looe woman has found her late husband’s wedding ring under an apple tree - 35 years after he lost it in their garden.

- Keeping with the subject of trees, Saltash Town Council has planted a descendant of Linkinhorne parish’s ancient Darley Oak in their town to mark the Queen’s Platinum Jubilee.

- Meet five members of the Tamar Valley Male Voice Choir who have amassed 158 years of choral singing between them and, after delays due to the COVID crisis, have at last received their long-service certificates.

- A holiday park on the fringes of Bodmin Moor has been snapped up by a 43-property group which is planning substantial investment in its facilities.

- In this week’s Westminster Column, South East Cornwall MPSheryll Murray describes a 40th anniversary of the Falklands War commemoration which left her moved. plus the discovery that she is among the MPs who have been sanctioned by the Kremlin!

- In this week’s In My View column, Jerome Satterthwaite of the South East Cornwall Labour Party talks about what he claims is the Government’s failure to address the cost of living crisis.

- We have a letter from a Cornish descendant living in Victoria, Australia, who would like help and advice about publishing or making more widely available her family history research.

- A Polperro man had told us about a disastrous trip to Mallorca where he found that the hotel he had been booked into had been closed for two years and he ended up flying home after only 36 hours in the Spanish island.

- The owner of a B&B in Looe has been ordered to pay a total of £8,567 in fines and costs after his promises failed to meet health and safety regulations.

- Loveny Male Voice choir has bagged the title of ‘Best Choir in the UK’ at Cornwall’s International Male Choral Festival.

- This year’s Boconnoc Steam Fair will instead be held in the grounds of another stately home, Port Eliot - but the owners of Boconnoc say the reason for the organisers changing the venue is due to a ‘miscommunication’ and they hope the event will return to them next year.

- This week’s edition also features a family’s memories of growing up in Cornwall which have been inspired by a recent Cornish Times article about a ‘Death Penny’ issued in memory of a soldier who was among the fallen in the First World War.

- We also have the story of how a pharmacy technician from Liskeard was shocked to discover that three tiny kittens had been born in her attic after an opportunistic cat sneaked in through a hole in the wall.

- Looe men and Fowey women rowers triumphed in the World Pilot Gig Championships held for the first time since the COVID crisis in the Isles of Scilly over the bank holiday weekend.

- In his latest fortnightly column for the Cornish Times, former BBC Spotlight presenter Justin Leigh muses on what a marvellous month May is.

- This week’s four-page Farming Diary section leads with Young Farmers Club members practising their stock judging skills in preparation for a competition later this month. There is also an article on how the public will be able to buy free-range eggs again after a relaxation of the poultry rules implemented due to avian flu, and we also have news from the agricultural and livestock sales.

- There are seven pages of Sport in this week’s Cornish Times edition, leading with the news that Torpoint Athletic manager Dean Cardew has incredibly become the third generation of his family to win a Souh Western League title when his team claimed the Premier East crown with a 7-1 victory over Honiton Town on Thursday. Plus, in an interview with the Cornish Times’ Nigel Walrond, Dane Bunney admits he was stunned to have lost his position as manager of Saltash United after what had seemed a successful season.

There is all this and more inside the latest issue of the Cornish Times, on sale now.