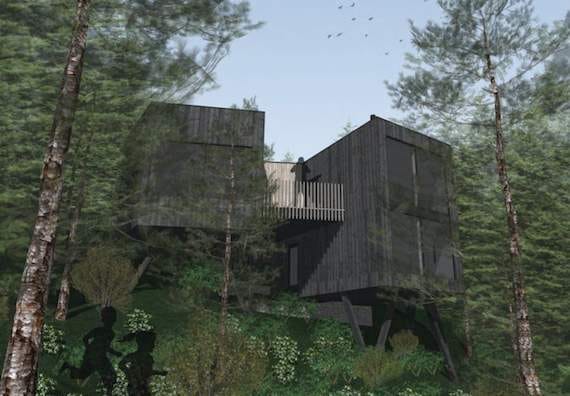 WOODLAND near Pelynt could become the setting for a new development of luxury eco-holiday lodges.

Hall Wood is currently a ‘working wood’, much of which is given over to the production of conifers for timber.

Now a project is in the offing to create 15 cabins on stilts, which would be integrated into the landscape, and completely self-sustaining.

With solar panels and technology such as air source heat pumps in use, it is envisaged that the site would produce a net excess of energy.

The development proposed would actually bring ecological benefits to the site, says agent Leap Associates, who are acting on behalf of the applicant Alex King.

Native species such as oak and hazel would be planted in place of some of the coniferous plantation - and the areas of woodland not used in the development would be managed as a nature reserve.

An education and visitor centre would also be built as part of the plans, and Leap Associates states that Hall Wood is already working in partnership with the Cornwall Wildlife Trust; the company has already sponsored Forest School sessions at Pelynt School.

A pre-application presentation was made to Pelynt Parish Council earlier this year. The agent states that during the meeting, the main concern raised by members of the council was that any holiday lodges built should not be given over to residential use.

No entertainment, bar or restaurant facilities will be created on the site, says the developer, and guests would be actively encouraged to use the nearby amenities in Pelynt and those in the wider area.

Improvements to the access road (known as the Beacons) including the provision of passing places, would be made as part of the scheme.

A full planning application has been submitted to Cornwall Council. To view the plans and leave a comment visit the Council’s online planning site and use the reference PA17/07467.