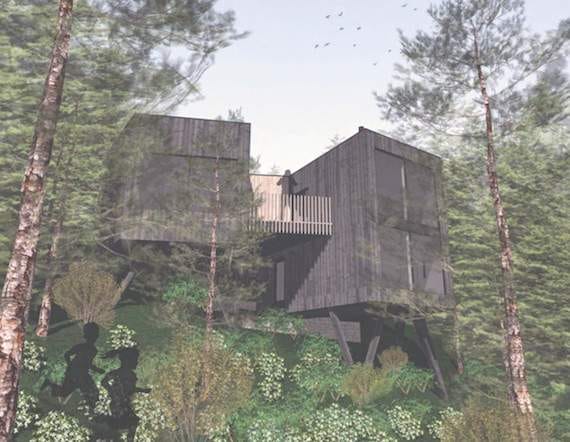 A WOODLAND near Pelynt will become the setting for tree top holiday lodges.

At Hall Wood, the 15 timber framed lodges on stilts will give holidaymakers the feeling of living in the tree canopy, said owner Alex King.

Planning permission has been granted for the project by Cornwall Council following support from Pelynt Parish Council.

The scheme will include an education facility, car parking, a new access across fields to the south of the site, an array of solar panels, and a waste water treatment facility.

As part of the project, the access road known as the Beacons will be improved with the creation of passing places.

The Cornwall Wildlife Trust says it has worked with Mr King throughout the project to ensure that the development is as wildlife-friendly as possible.

The woodland itself will be managed as a nature reserve, and there are plans to create a Hall Wood Forest School, where groups can take part in activities such as animal spotting, shelter building, outdoor cooking courses.

Hall Wood has joined the Trust’s Business Supporter scheme as a wildlife partner, which means the charity is provided with much needed funding, while the owner benefits from advice on creating a site that is beneficial to the ecosystem and the environment.

Mr King said: ‘We are an extremely proud supporter of the Cornwall Wildlife Trust and a working relationship was the logical next step. We are excited to see where this partnership takes us, and we look forward to sharing the fruits of this with our guests in future.’

Antonia Mullally of the Trust said it was ‘refreshing to see a developer seek wildlife advice and support early on in the planing stages in order to enhance a site’s natural assets’.

Historic England, while not raising any formal planning objections, noted that the construction of the holiday lodges ‘would cause harm to the setting of the scheduled monument known as Hall Rings’.

Hall Rings is described by Historic England as a late bronze age - early iron age hillfort, which survives as an oval enclosure measuring around 120m long.

It would be up to the local planning authority, said Historic England, to decide the bearing of this factor upon any decision made.