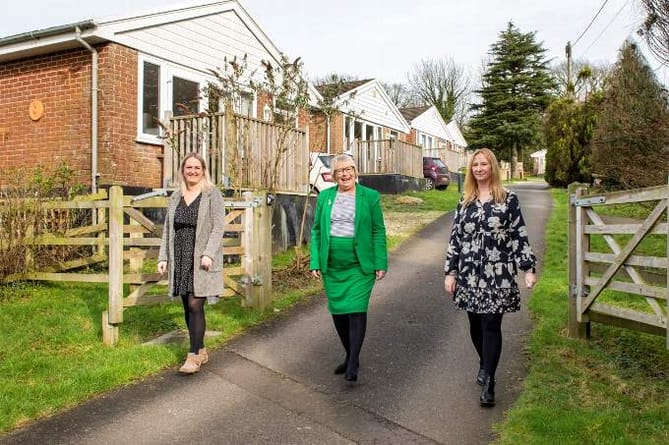 SOUTH East Cornwall MP Sheryll Murray has visited a care service for people with complex social needs based near Liskeard.

Mrs Murray has praised the care service Buttermill Cottages for the improvements which have been made there since new operators took over last year.

The service, which currently supports six individuals with complex special needs and disabilities, has been operated by Modus Care, part of Salutem Care and Education, since September 2021.

Modus Care acquired the service following the departure of its previous owners - Achieve Together, formerly The Regard Group - following a history of unsatisfactory CQC reports. It has been working closely with Cornwall Council to improve the facility, and its sister site, Fox House.

Mrs Murray was invited for a tour of the service, where she saw improvements that had been made both to the living environment and in recruitment during the last five months.

Since Modus began working with Buttermill Cottages, it has reduced the number of vacant hours by more than 60 per cent and has developed a recruitment strategy which involves local young people joining the workforce and building a career in the care sector.

By summer 2022, the team will be adding outdoor activities, including a trampoline, to the site and the landlords of Buttermill will be refurbishing a suite of bungalows to increase capacity.

Ann Holt, regional director at Modus Care, said: “It was lovely having Sheryll Murray MP to visit us, and I was delighted she had the opportunity to meet some of the individuals we support.

“She had a lovely chat with Mishe and got to meet her cat, Oreo, who is like Mishe’s shadow. When she first got Oreo, she was worried he might wander off and get lost because we’re in quite a rural area, but he never leaves her side.

“We also talked to Mrs Murray about our current project, supporting the people in our care to get their own vehicles through the Motability scheme. The latest vehicle we received is electric and I think she was quite impressed that we’ve already arranged to get charging points installed.

“We’ve come a long way since September, but we’ve got a lot we still want to do. We hope Mrs Murray will join us again in the summer so she can see even more improvements.”

Sheryll Murray said of the visit: "I was really pleased to be able visit the Buttermill Cottages near Liskeard. which are a supported living service for adults with complex mental health conditions, including autistic spectrum disorder.

"It was good to be able to talk to the regional manager Ann, the site manager Chloe and one of the residents. The cottages have recently changed hands to Salutem and it was good to hear of the plans they had for the future.

“I hope the residents enjoy their time at the site and look forward to visiting again to see how the company manages with its plans to improve the site."

Mishe said: “It was really nice to meet the Mrs Murray. She was nice to talk to and asked about my cat. I hope she comes back to see us soon.”