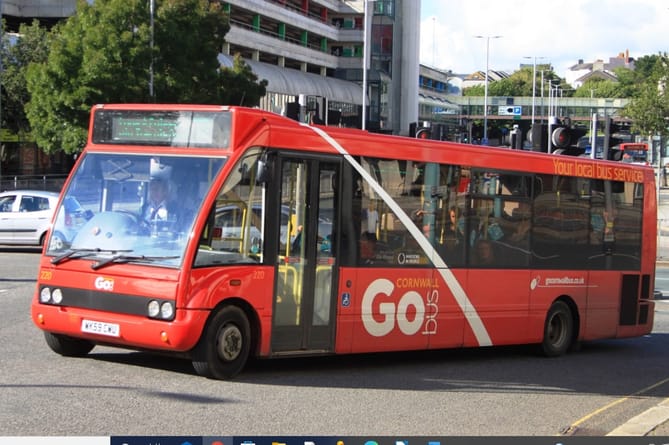 A Go Cornwall bus in the streets of Plymouth - but it has now emerged that cross-boundary bus routes running from Cornwall to finish outside the county will be excluded from the much-heralded ‘county-wide’ reduced fares scheme beginning on Sunday. (Picture: Geof Sheppard/Wkipedia Commons )

A SENIOR South East Cornwall Councillor has urged Cornwall Council to rethink its proposals over the spending of the grants for bus charge cuts after it emerged that a number of essential routes are being excluded from the reduced fares scheme - because they finish outside Cornwall.

Andrew Long, Mebyon Kernow’s representative for Callington & St Dominic, made the call following the announcement that the grant would cover ‘routes within the Cornwall boundaries only’.

Cllr Long said: “So the levelling up agenda pronounced by the government will not benefit thousands of East Cornwall residents once again.  The bus routes such as the 79 from Callington to Tavistock, the 12 from Bude, Launceston and Callington into Plymouth, and the 71 from Liskeard to Derriford Hospital will not count for the discounted fares.

“This means that once again, people in South East Cornwall who have no choice but to access services across the border will be treated as second class citizens as far as the Government and Cornwall Council are concerned.

“Given the special circumstances where East Cornwall does not have its own Accident & Emergency Department the Council surely need to rethink this and ensure that the thousands of people who live along the border get treated equally.”

Cornwall Council’s Portfolio Holder for Transport, Philip Desmonde – who gave a special presentation to Saltash Town Council on his proposals for Cornwall-wide bus services and fares late last year - has written to confirm that the grant and discount would only cover routes within the boundaries of Cornwall itself.