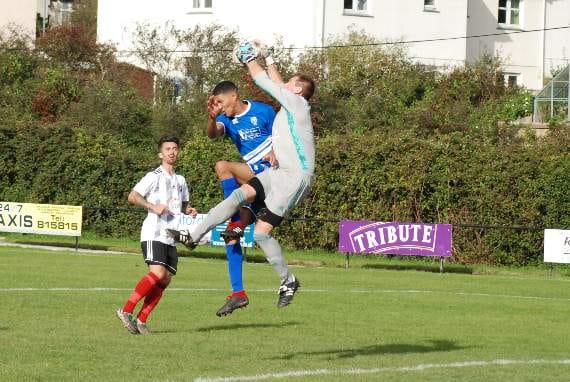 Millbrook goalkeeper Chris Wearing (pictured) is out for between six and eight weeks. Picture: Dave Potham

Wearing fractured a fibula in the closing stages of the recent friendly against Liskeard Athletic at Lux Park after he got caught by a tackle.

He somehow managed to play out the final few moments of the game after prolonged treatment, but he had to be helped off the pitch at the end of the match, and a subsequent trip to hospital revealed the true extent of the damage.

“I was concerned as soon as it happened because Chris isn’t somebody who makes a meal out of things and it was a poor challenge,” Millbrook manager Mackenzie Brown told the Cornish Times. “I spoke to Chris after and he felt because his leg was off the ground he had perhaps ‘got away with it’ as it wasn’t planted, but that unfortunately wasn’t to be the case when he went for an X-ray on Sunday morning.

“Anyone who’s watched us in the last couple of years knows how important Chris has been for us so it’s a huge blow as I think he’s the best all-round goalkeeper at our level and he very much goes under the radar – thankfully for us!

“However, he was going to miss a handful of games at the start of the season anyway as he’s getting married, as is his brother and his best mate, and with weddings come stags etcetera, so that was an issue we were having to deal with anyway.

“We had heard Sam had left Helston last week, and had spoken to him briefly about possibly covering for us in those games and he was at the Liskeard game when Chris got injured as we planned to have a chat then.

“Then 24 hours later we found out how severe Chris’ injury was and that he could be out for six to eight weeks, so it worked out quite smoothly in the end.

“To have a replacement like Sam is fantastic for us, I wouldn’t have hesitated to use our reserves goalkeeper Scott Shirley who’s also superb, but that makes thing difficult for his manager Danny (Medlin) and his plans so it made complete sense when Sam was available.

“Sam’s an excellent keeper and has operated at this level for many years on and off the pitch.

“More importantly, he’s a great lad and the loyalties he has shown to the clubs he’s been involved with over the years goes a long way in my eyes, as he’s cut from the same cloth as everyone in our current squad, so he will fit right in.

“He has already hit the ground running with a clean sheet at Launceston on Friday."