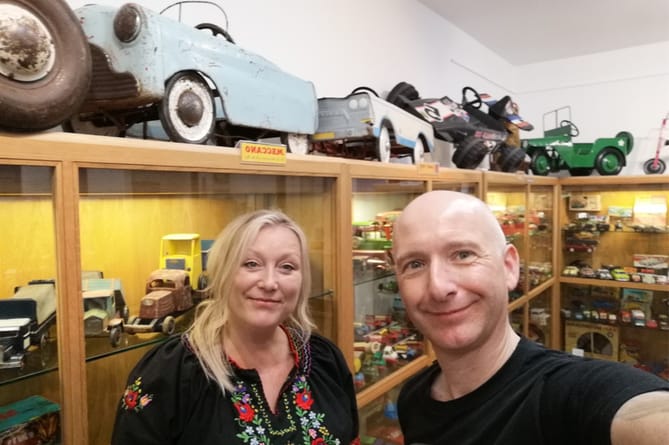 Phil Chapman, aka the Toy Man, with antiques expert Karyn Sparks during their visit to the toy collection at Liskeard Museum while filming this week’s episode of the Quest TV show Drew Pritchard’s Salvage Hunters The Restorers. (Picture: Curve Media )

A SOUTH East Cornwall Museum will be appearing on TV this week.

Liskeard Museum will feature on this Wednesday night’s (April 11’s) episode of Drew Pritchard’s Salvage Hunters The Restorers on Quest TV at 9pm.

The episode, the seventh in the current series of the show, will see antique dealer Karyn Sparks travelling to Cornwall to visit the museum while looking for help and information from toy expert Phil Chapman on restoring something special Karyn has bought.

Phil Chapman is a Cornish toy hunter specialising in tinplate toys and is known as ‘the Toy Man’. With 20 years’ experience of collecting and restoring toys he owns the award-winning display of toys that the public can visit at Liskeard Museum in the town’s Pike Street.

The item that Karyn has brought along will then go to be restored by specialist restorer Ted Edley at Dorset Copperfish.

Curve Media, who produce and film Drew Pritchard’s hit TV show for Quest TV, spent a day filming in the museum and around Liskeard town centre.

The popular programme is aired all over the world so Liskeard Museum is likely to get lots of publicity as a result.