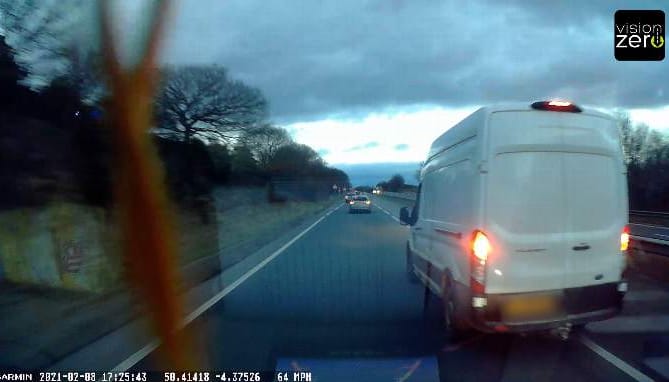 More footage of dangerous and unacceptable driving in the South West has been released by the Vision Zero South West road safety partnership and Devon and Cornwall Police’s Operation Snap.

It comes at the end of a year in which Devon and Cornwall Police issued almost 1,000 notices of intended prosecution (NOIP) to motorists who were caught on camera driving illegally.

Video submissions have been made by members of the public using dashcams from cars, vans and lorries as well as from helmet-mounted cameras used by cyclists, horse riders, motorcyclists and other road users.

The police want to send a clear message to road users - if your driving behaviour puts people’s lives at risk, it’s only a matter of time before you are identified and held to account.

The videos submitted through Op Snap show all manner of offences including dangerous overtaking, careless and inconsiderate driving and placing vulnerable road users in significant danger.

Since December 2020, Devon and Cornwall Police has issued 999 notices of intended prosecution through Op Snap.

In November 2020, 21% of all the submissions made to Op Snap were from cyclists or involved a cyclist.

Statistics released by the Home Office this week show that the while speeding offences across England and Wales reduced by 12.9% compared to the previous year – largely believed to be due to the various national lockdowns - careless driving fines increased by 19.6%.

He said: “With the increased profile of Op Snap and the proliferation of dashcams – including 170 issued by Vision Zero South West in Devon and Cornwall – it’s only a matter of time before poor drivers are held to account.

“We do this to save lives. Tragically, in 2020 there were 44 people killed and a further 624 seriously injured on the roads of Devon and Cornwall. The public report crime to us every day, we rely on that partnership. Op Snap is no different but uses new technology and online reporting to enable those who place others at risk to be identified.

“Any death on our roads is a tragedy, but it is also avoidable. Vision Zero wants to prevent all fatal and serious collisions in Devon and Cornwall by 2040 – and if identifying dangerous drivers on camera and prosecuting them sends a clear message to all motorists to consider their own driving behaviour, then we will continue to do so.”

The Department for Transport released its official annual road casualty statistics in October which showed that in Devon and Cornwall 44 people were killed and 624 people were seriously injured.

While this is a reduction compared to 2019 - when there were 48 people killed and 768 seriously injured – 2020 also saw a 21% reduction in vehicle traffic across Great Britain due to the Covid-19 lockdowns.

The Department for Transport say the decrease in fatalities in 2020 is associated with this reduction in road traffic, meaning the rate of fatalities actually increased in 2020.

Of those killed or seriously injured on Devon and Cornwall’s roads:

• 1 was a bus or coach occupant

There were also four reported casualties of incidents involving e-scooters in Devon and Cornwall during 2020. Alison Hernandez, Police and Crime Commissioner for Devon, Cornwall and the Isles of Scilly, is chairman of Vision Zero South West and also the national APCC lead for road safety.

Commissioner Hernandez said: “When dealing with figures like these it’s important to remember that every single one represents a person who has suffered dramatically as a result of a collision on our roads.

“Whether it’s someone who dies, sustains a brain injury, loses a limb or suffers from the harrowing mental effects of a road traffic collision, the effect this incident has on them – as well as their friends and family - cannot be underestimated.

“The whole purpose of Vision Zero South West is to cut road traffic deaths to zero. All our partners will admit this is an extremely ambitious target but one which needs to be at the forefront of all of our minds.”

For more information about Op Snap – or to upload video footage - visit www.devon-cornwall.police.uk/opsnap