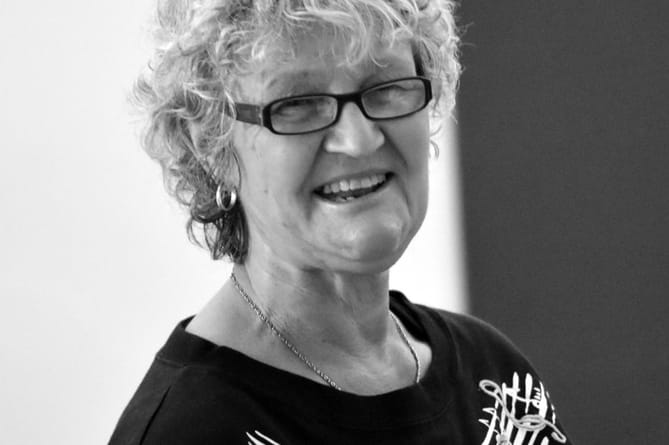 AN event in South East Cornwall showcasing Tudor period instruments, folk songs and shanties plus choral and classical music, has been hailed a success, with the hope that the event might be repeated in future years.

The weekend of June 10-12 saw the inaugural Saltash Songs and Shanties Festival taking place at a variety of venues around the town as part of the Tresorys Kernow (Cornish Treasures) pilot project to breathe new life into towns and villages by using culture and heritage to bring some joy into people’s lives as we recover from the COVID pandemic.

The festival began on the Friday morning at Saltash Library with an event for youngsters, as ‘Jude’s Musical Menagerie’, led by Liskeard School and Community College teacher and composer Judy Whitlock, gave children aged five and under and their carers a chance to sing along to and hear instruments large and small playing tunes ranging from Baby Sharks to Nellie the Elephant.

That evening, Saltash’s magnificently restored railway station building was the venue for a concert entitled Shanties & Songs of Land & Sea, where members of the public could join folk singer Claire Ingelheart in learning traditional shanties and songs and hearing stories about inspirational women of Cornwall, including Saltash’s own local oarswoman hero Anne Glanville – who was congratulated by Queen Victoria herself after her crew of four women rowers beat an all-male crew at a mid 19th-century sailing event in Fleetwood, Lancashire.

Cornwall road closures: nine for motorists to avoid this week

Cost of living crisis: Dozens of tenant evictions in Cornwall

As well as showcasing Cornwall’s choral traditions which began in the mining and fishing industries the repertoire included traditional songs and shanties from the Duchy.

Although written in 1926, the Capriol Suite uses a series of Renaissance dance tunes gathered and adapted from the manual Orchésographie, which was written by the French cleric Thoinot Arbeau in the late 1500s.

On Sunday lunchtime there was further 16th century music to be heard in the appropriate setting of the sun-drenched and flower-bedecked garden of Mary Newman’s Cottage, reputed home of the wife of Elizabethan naval hero Sir Francis Drake. Dressed in Elizabethan costume – and watched closely by two young girls who had also donned the fashions of Good Queen Bess’s reign – internationally renowned period instruments player Matthew Spring performed tunes on the hurdy-gurdy, lute and early English guitar – which he explained was more of the size and tuned in a similar way to today’s ukulele.

Matthew also explained that the hurdy-gurdy – which was a particular favourite with the children present – was an instrument often played by blind beggars in the 16th century, a fact illustrated in French paintings of the period. He also played a less familiar stringed instrument called the setar, a kind of long-necked lute which evolved in Persia from the ancient lyre.

Saturday afternoon saw the restored railway station building hosting the Heaven’s Thunder Live Music and Film Screening, a concert premiering excerpts from a film made of a theatrical show involving horses, riders, musicians and members of the local community at Duchy College during 2021. While the film footage was being shown, it was accompanied by live performances of songs by 20 costumed singers and instrumentalists. 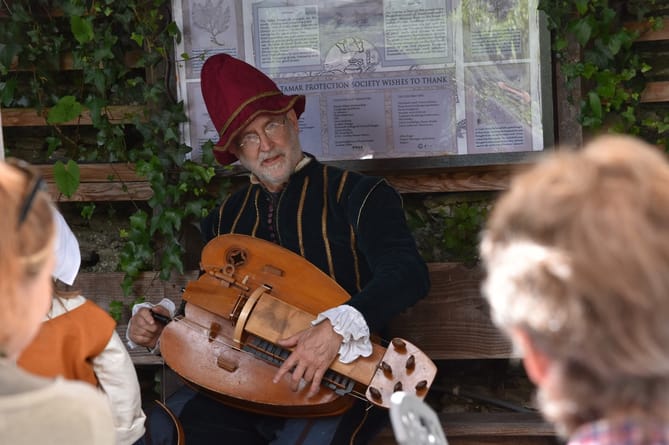 The festival concluded on the Sunday evening at St Nicholas and St Faith Church with a concert entitled Eliza is the Fairest Queen – appropriate for the current monarch’s Platinum Jubilee year but taking its name from a song written by Edward Johnson in the reign of Queen Elizabeth I.

The performers were Matthew Spring, along with his wife Sara and son Lewis who together are members of the early and world music group Sirinu. The repertoire of Elizabethan song tunes from royal court and countryside saw the trio telling stories to put the songs in their context while amply demonstrating their skills as both instrumentalists and singers, with Lewis mostly performing as a countertenor – the Tudor equivalent of Gary Barlow, able as one of the songs put it, to ‘sing high and to sing low’ but in this case mostly high. Mum Sara, meanwhile, held the audience mesmerised as she ‘multi-tasked’ by playing the recorder and drum simultaneously and also played a series of tunes on the early keyboard instrument the virginal – a precursor of the harpsichord which many people present had never seen apart from in pictures.

The instrument, which is like a long box with the strings running lengthways and with a short keyboard on one side, and which was often played by ladies while standing up, was apparently played skilfully by Queen Elizabeth I herself and also appears in a number of paintings by the renowned 17th century Dutch artist Vermeer.

Those present at the concert were surprised at the strength of the virginal’s sound and several people came to have a closer look at its elaborately decorated casing at the end of the performance.

Many are hoping that the success of this inaugural festival will see the event returning next year.