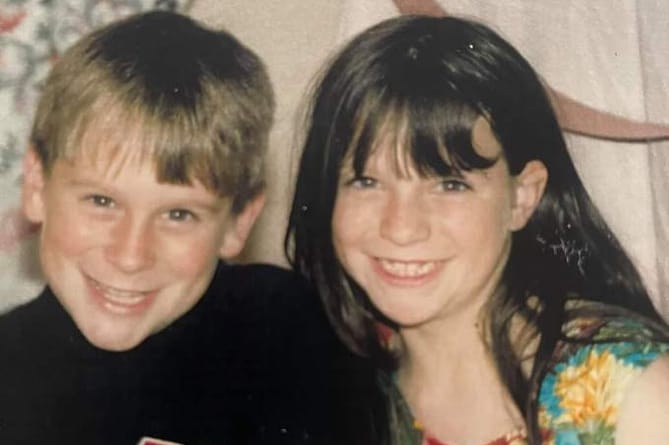 A father who lost two children and one of his best friends when a drunk driver ploughed into their car on the A38 at Notter Bridge has given an emotional plea to the people of Devon and Cornwall ahead of Christmas.

Steve Kimberley’s eldest son Matthew, 12, and daughter Lucy, 10, died after a Range Rover driven by a drunk man careered into them as they drove home from a football match in Plymouth.

Family friend Ben Jewell, 19, also died as a result of the collision, along with the driver of the Range Rover who was killed on impact.

Steve, who was left badly injured and confined to a wheelchair after the crash, wants people to know that drink driving is “not OK” and can have horrendous consequences.

Ahead of the Christmas party season, which traditionally sees a spike in drink driving incidents, Steve has recorded an emotional video for the Vision Zero South West Road Safety partnership recounting the crash. This year is the 25th anniversary of when it happened.

Steve, who lives near Falmouth, said: “It was the 24th of July, 1996. I’d taken Matthew and Lucy, along with my good friend Ben Jewell, for a treat at the end of the school year to see Chelsea vs Plymouth Argyle in a pre-season friendly. It was a big occasion.

“After the game we headed back to the car and started our journey home. We got out of Plymouth and got down to Notter Bridge and as we came around the bend to the left and were hit at high speed by a drink driver who was driving a Range Rover.

“It hit us with such speed his car left the ground and landed the other way on the road. I remember the impact and at first there was this silence which is probably only seconds, but seems to go on for a long time while you’re trying to assess what’s happened to you.

“After those few seconds all hell broke loose - the sound of metal, breaking glass and hissing and the smell of diesel. It must have been awful for those who saw it and the emergency services who attended.

“It was carnage, absolute carnage. The driver hit us so hard that when the police arrived they couldn’t identify what type of car we had been driving.

“Ben was sitting in the front and hit the dashboard and was critically injured. Lucy was sitting behind me and was conscious at first. Matthew didn’t fare so well.”

Paramedics were soon on the scene and extracted Matthew from the car first.

Steve said: “They did CPR on the roadside, but it was too late for Matthew.

“They got Lucy out and took her to the ambulance, but all the time I couldn’t see any of this as I was trapped and unable to turn around.

“A coach driver called Gary, who had been driving a load of Argyle fans home, got out and was with me and kept talking to me saying ‘stay with us buddy, don’t go to sleep’.

“They had to cut me and Ben out of the car. They wrapped me in something like a lead blanket to protect me from the broken glass and metal. It took a long time and there was so much going on.”

Steve was transported to Derriford Hospital with a broken collar bone, damage to his sternum and severe leg and hand injuries. He remembers being in intensive care when the news was broken to him about Matthew and Lucy.

“I thought it was a bad dream. I knew they were hurt but I had this feeling that they were going to be alright. I remember saying to someone ‘this isn’t fair, how is this fair?’.

“It just didn’t seem real, it felt like I was in someone else’s body.

“The following week Ben’s parents had to take the decision to switch his life support machine off. I can’t imagine what that must have been like for them. He was their only son.”

Steve remembers visiting his children in a wheelchair at the chapel of rest at the hospital.

He said: “There’s something very sobering about seeing your children, covered in a white sheet, both in coffins. I remember thinking ‘that’s them, but it’s not them’ because you expect them to just run through the door.

“That was the last time I saw my children. Nobody wants to outlive their kids.

“I’d have willingly given my own life to save one, two or all three of those smashing young people who had their whole lives ahead of them, but unfortunately you’re not given that opportunity. They were taken away from us, and it’s not fair.

“Going to both your childrens’ funerals at the same time in your local church is something you should never had to do. Following a hearse to the crematorium in Truro with your kids in coffins ahead of you, seeing that curtain go across and knowing you are never going to see them again – I want people to know that it is not OK to drink and drive.

“If that driver hadn’t drunk any alcohol, my kids would still be here – I’d have grandkids. My youngest son would be an uncle. Matthew and Lucy would be coming round to us for Christmas and I’d be bouncing grandchildren on my knee – but that hasn’t happened.”

On the anniversary on the collision, Steve takes to Facebook to post pictures of Matthew and Lucy and tell their story, with the hope of preventing anyone who might be thinking about driving while under the influence of drink or drugs.

He said: “I know there are people out there who have seen my posts on Facebook and said they think very carefully about what they do now. I will continue to do those posts until the day I die because people need to know it is not OK.

“It’s quite simple, if you know you’re going out for a night, you can do a number of things.

“You could have a designated driver who you provide with free coffees and soft drinks for the night. If you can afford to drink, you can afford a taxi or an Uber or a minicab.

“If you’re not too bad, you can walk home safely. Or just don’t drink, because not having a drink won’t kill you.”

Steve also believes friends, bystanders and landlords have a major role to play in preventing incidents of drink driving.

He said: “If you’re in a group of people and someone is drinking and you know they are thinking of driving, you have a responsibility to do one of several things. Take their keys away, walk them home, call them a cab.

“Never get in a car with a driver if you know they’ve been drinking, you are putting yourself in danger. Park your car in front of theirs so they can’t get out.

“If you’re a publican and you know someone has driven to your pub, you have a responsibility to yourself, that person, their family and anyone else. Take their keys, call them a cab. It’s all about taking responsibility.

“Also, be aware – if you’ve had a drink of an evening, you could well be over the limit the following day.”

Devon & Cornwall Police launched its Lift Legend Christmas drink drive campaign this month, with over 110 licenced premises set to offer soft drinks to those who give free lifts home to friends and family after a night out.

The initiative runs to Saturday 1 January 2022 and is a modern approach to the annual Christmas campaign.

On the purchase of their first soft drink, drivers will be able to receive a voucher to have their second free of charge at participating venues.

Superintendent Adrian Leisk of the roads policing team said: “It is vital we do all we can to ensure anyone on a night out is able to get home safely. Our new initiative aims to encourage those heading out for the night to plan who is going to be their Lift Legend.

“Despite long-term reductions, drink and drug driving still accounts for 15 per cent of road deaths and almost 10,000 casualties nationally each year.

“During last year’s Christmas campaign, officers in Devon and Cornwall carried out 1,348 breath tests and charged 163 people with a drink drive-related offence.

“Alongside the Lift Legend education campaign, officers will be out in force rigorously targeting those who are a danger on our roads, day or night.

“It is also important to remember that you shouldn’t seek out lifts from those you don’t know or who aren’t licenced such as through social media networks. Only get into a vehicle with someone you know and trust.

“Alcohol and drugs impair many of the functions necessary for safe driving; reaction times and spatial awareness are affected significantly. This may still be the case the morning after, depending on how much alcohol is consumed the night before and when you stopped drinking.

“If police think you are unfit to drive through consumption of alcohol, even if your breath test registers lower than the prescribed limit of 35 micrograms of alcohol per 100 millilitres of breath, you can still be arrested and may be charged with an offence. In short, you do not have to be drunk to be a drink driver. Don’t risk it.

“It’s not just you that’s at risk. You could kill or seriously injure another person. Drink driving destroys people’s lives and those of their families. Avoiding this happening is as simple as planning ahead, leaving the car at home, and using a taxi, public transport or designated driver to get home.”

Alison Hernandez, Police and Crime Commissioner for Devon, Cornwall and the Isles of Scilly, is chairman of the Vision Zero South West board as well as the national APCC lead for road safety.

Commissioner Hernandez said: “Drink driving is completely unacceptable – it puts the driver, passengers and innocent members of the public at substantial risk.  Those found guilty of this crime face losing their license and even going to prison, which could cost you your job and livelihood.

“This doesn’t just apply to people who are on a big night out, those driving the morning after a few drinks could also unexpectedly be over the limit and unfit to drive.

“The good news is there have never been more alternatives to drinking and driving. Jump in a taxi, Uber, bus, train or call a friend or relative for a lift. There’s also a huge variety of great-tasting, non-alcoholic drinks available so why not ditch the booze and be a Lift Legend for the night?

“Please don’t make this Christmas a time to remember for all the wrong reasons.”

If you have information about anyone who has been drinking or taken drugs and is about to drive, you should call police on 999 with the make and model of the vehicle, registration number and direction of travel.

For more information about the Lift Legend scheme visit https://www.devon-cornwall.police.uk/liftlegend